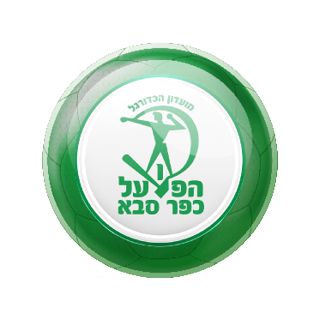 Hapoel Kfar Saba was founded in 1928, when first hosted its home games in "Hapardesim" stadium. In 1986 the team moved to "Levita" stadium, where it hosts its home games until today. The "Greens" hold three National Cups (1975, 1980, and 1990) and one historic League Championship (1982) in their trophy closet.

The club's first landmark was recorded in 1951, when it first reached the premier league. More than 20 years passed until the team's first title in 1975/1976's season in which Avraham Marchinski, the captain, lifted the National Cup; under the guidance of Shlomo Sherf, Hapoel Kfar Saba FC beat Beitar Jerusalem FC 3:1, thanks to Yoram Mor's two goals and Itzhak Shum's goal.

Five years later, during 1980/1981 season, the "Greens" won the National Cup for the second time, again under the guidance of Sherf, after beating Maccabi Amidar Ramat Gan FC 4:1 thanks to Eli Yanni, Yizhak Neeman and the captain, Israel Fogel's two goals.

Two years later, during 1982/1983, the most significant peak moment was recorded for Hapoel Kfar Saba FC: winning the League Championship under the guidance of Dror Kashtan, who managed to pass Maccabi Netanya FC which led the table throughout the season, starring Eli Yanni with 13 goals and Izhak Shum (with nine assists) who were part of an unforgettable season. One year later the team won the "Champion's Champion" title, after beating Hapoel Yehud FC, but also got relegated to the second division at the end of the season.

Kfar Saba FC needed only one season to prove that it belongs in the premier league. Indeed, under the guidance of Izhak Shum, alongside Eli Yanni with 11 goals and Israel Fogel with 16 goals, the team reached the premier league. In the end of 1985/1986's season the team left its legendary "Hapardesim" stadium, and the last one to conquer a goal there was Eli Yanni. As stated, the team moved to "Levita" stadium.

Up until winning the National Cup in 1989/1990, the team didn’t manage to record any titles and positioned itself mainly in the middle of the table. The cup final was against Shimshon Tel aviv FC, in which Kfar Saba FC won 1:0 in over time, thanks to Gideon Simon's goal. The team's coach was the Polish Vital Lazark and the captain Eli Yanni waived the cup.

Since then, the fans are not satisfied with their team's performance and eventually the club got relegated to the National League. In the early 2000's many coaches were replaced, including Izhak Shum, Elish Levy, Eli Ohana and Slovodon Drafitch. The team had to struggle hard to stay in the league, including a significant struggle in 2007/2008 in which Kfar Saba FC relegated again although beating Hapoel Tel Aviv FC in Blumfild, after Yvoa's goal.  Following that, Eli Tabib quit and transferred the ownership to Kfar Saba's association. The team kept on presenting poor performance on the pitch and didn't get any titles, including getting in an economy crisis which led to its break down and the loss of 9 points at the beginning of 2013. The club got relegated to the A league, but a year later returned to the National League under the guidenss of Felix Naim on the side lines. Moreover, Eli Yanni became the main owner of the team in May 2014, with 90% of the ownership.

Hapoel Kfar Saba FC opened the 2014/2015's season with a good ability, setting itself at the top of the table and the chance to win an entrance ticket to the premier league.